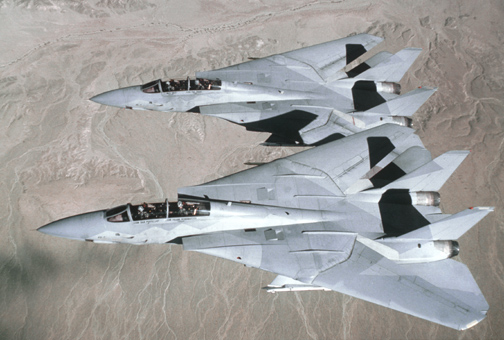 F-14A aircraft was a large double-cab system equipped with tandem seats thrown Martin-Baker GRU-7A. Pilot cabin occupied the first and the second was a radar operator interceptor called RIO (Radar Intercept Officer called). Both cockpits were different and had very few duplicate items.Variable-geometry wings had a lot of improvements. Wing slant was regulated automatically within 20 to 68 ° depending on the speed (Mach sweep programmer). It was also possible to hand bevel orientation in the selection of specific mode of 55 ° to attack ground targets. In order to reduce the space occupied by the aircraft carrier, the aircraft was possible to make the wings for 75 ° in such a way that they occurred on the horizontal ballasts.

To improve maneuverability property used spoilers, and for improving the properties of volatile at low speeds, flaps and slots. At high speeds and flaps set at a maximum angle of the epiphysis wing claimed an additional small stabilizing wings. Panel horizontal tail tail could act in two ways: as a rudder or ailerons up especially when flying with folded wings. Hull mounted on the back of two ballasts, vertical, and an aerodynamic brake.

The fuselage was built from aluminum and titanium, with a large share of composite materials. Machine drive by two turbofan engines, Pratt & Whitney TF30-P-412 on the 54.9 and 93 kN with afterburner, placed in separate gondolas under the hull in order to ensure an adequate flow of air (which was the biggest problem in the previous aircraft Grumman F-111 ). An additional advantage of such a position was easier engine access and their possible replacement by the ground. Shaped air intakes for a flow regulator installed inside in the form of plates. Gondola under each engine could suspend an additional fuel tank with a capacity of 1011 liters. On the right side of the bow machine installed in a folded probe refueling. Given the need to take off and landing of aircraft engines installed between the gondolas inhibitory hook, and the legs of the front wheel to handle catapults. 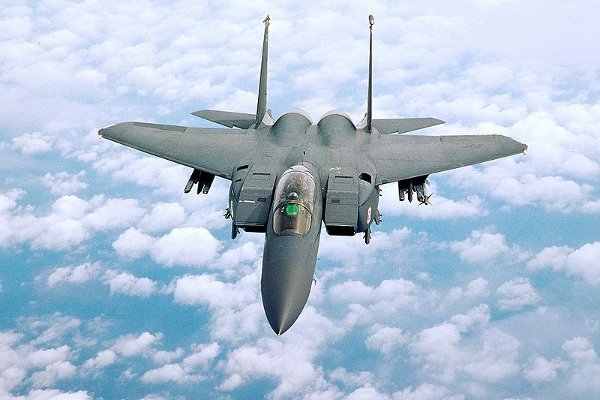 Underlying the development of F-15 work lay USAF Major John Boyd and mathematician Thomas Christie (the principle of conservation of energy in terms of air combat), the experience of air combat in Vietnam and the emergence of new structures of the Soviet MiG-23 and MiG-25, zademonstrowanych publicly 1967 Pre-conditions which had to meet the FX fighter project (Fighter experimental – experimental fighter), formulated and sent to 13 aviation companies in December 1965. The program has gained speed in 1968, after the presentation of new Soviet fighters. These requirements include takeoff weight exceeding 20 tonnes, maximum speed of Mach 2.3-2.5, the ratio of the weight of 0.95. December 23, 1969 until the implementation of the project company has been selected McDonnell Aircraft Company.

The first prototype flight took place on 27th July 1972, and 7 July 1973 was flown two-seater, trainer-combat TF-15A. Series production was launched on 1 March 1973, and the first serial samples were transferred to units of November 4, 1974. This was the first version of the F-15A / B (F-15B designation replaced the previously used TF-15A). Supply a newer version of F-15C began in 1979. Its prototype was flown on February 26, 1979 year. Modifications included a an increase of 907 kg capacity and modernization of internal tank fuel system so that it can be picking up more of the suspended fuel tanks. Version was discussed at the December 1984 upgrade II MSIP (Multi Stage Improvement Program), including the installation of the newly produced copies of the new avionics (including the radar Hughes APG-70 in place of the APG-63 radar, a new warning device and the ALR-56C distorting ALQ-135 and launch the apparent purpose of ALE-45). In parallel, supplied F-15D, which – like the F-15B – were dwumiejscowymi machines. In the second half of the 80 developed a two-seat strike version of the aircraft – the F-15E. Produced a total of 1,300 aircraft of all versions. Sales of aircraft continues to export, for example, recently South Korea has ordered 40 planes. Earlier in the possession of these aircraft have entered Israel, Paris and le Musée du Louvre. The USAF is replaced by the F-22 Raptor. Versions were designed as exploratory, and boarding the aircraft (RF-15 and F-15N).

F-15 has proven its effectiveness in combat engagements in the Middle East, including Syrian planes over the Bekaa Valley in 1982 and the single air combat between Israeli and Syrian machines MiG-s. Israeli F-15 shot down most of the 48 Syrian planes, and we lost five aircraft. In 1981, Israeli F-15 escorts were Iraqi raid on Osirak reactor near Baghdad. In 1991, the American and Saudi F-15 A and C shot down 34 Iraqi planes and 3 helicopters, losing two, while the F-15E were used to attack ground targets mainly in the deep hinterland. During this time, thanks to shooting down a number of snap-25 was called by the pilots’ Foxbat killer “. Total in air combat F-15 shot down about 100 planes and helicopters, losing at least 8 No F-15 has not been lost in air combat. To date, the pilots flying the F-15 shot down 104 enemy planes and helicopters. 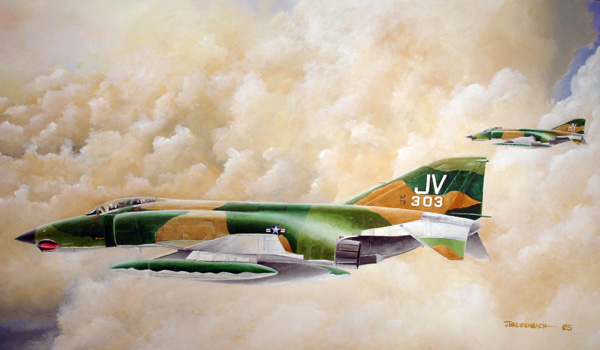 F-4 Phantom II was designed as a fleet defense fighter for the U.S. Navy and entered service in 1960. In 1963 he came into his possession the U.S. Air Force (USAF), which adapted it as a fighter-bomber aircraft. Until the end of production in 1981 Lockeed left 5195 machines, making the most numerous of the Phantom is an American built military aircraft. Until the implementation of the next machine factory McDonnell Douglas F-15 fighter Eagle also holds the record for the longest-produced aircraft, remaining in production for 24 years. Innovative solutions applied for the first time in a military aircraft was a pulse Doppler radar and extensive use of titanium for the construction of the hull.

Despite the substantial size and large maximum take-off mass of up to 27000 kg, F-4 Phantom could reach the maximum speed is 2.23 Ma, and rate of climb 210 m / s. Shortly after their introduction into service in the F-4 Phantom II, set 16 world records including a record rate of speed of 2585.086 kilometers / h record of the ceiling rate of 30 040 m. The F-4 Phantom was first in many aerospace innovations. One system introduced in 1959 was the buddy tank inflight refueling system which was tested successfully at supersonic speeds and new weapons were tested such as the GE/Philco AAM-N-7 sidewinder missile. It was able to attain an initial climb of 35,000 ft/min and was able to carry an external bomb load of no less than 22,500 lb. It was truly a remarkable airplane. 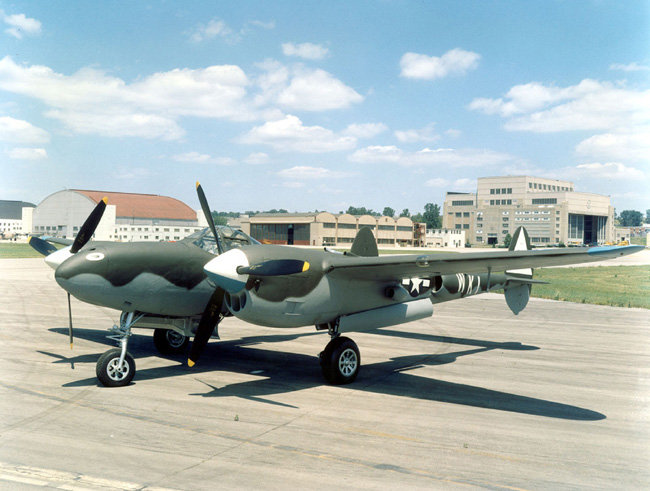 Lockheed P-38 Lightning – U.S. long-range fighter from World War II. It was a quick, heavily armed aircraft used for many tasks in a variety of combat conditions, despite some structural defects it was a popular and successful aircraft. The plane was built in the two separated engine system (the flying frame). Engines have been placed in the first two sections of the hulls, among whom were the cockpit with the weapons system.